These worked examples have been fielded as homework problems or exam questions.

The residual force on the fluid for the conditions stated must be 83,736 N in the direction of fluid flow and the reaction force on the test stand will be in the opposite direction. Because there is a structural factor of safety requirement of 3, then the force to which the stand should be designed is about 251 kN.

Consider a turbojet-powered airplane flying at an altitude of 35,000 ft with a true airspeed

of 530 mph; refer to the schematic below. The pressure ratio

at this altitude is 0.2353 and the density ratio

is 0.3099. The inlet and exit areas of the turbojet engine are

, respectively. The fuel-to-air ratio by mass injected into the engine is 0.005. The jet exit velocity

and the pressure at the exit

1. The control volume is shown in the figure below.

2. The air density at the given altitude is

The corresponding ambient pressure of the air is

3. The air mass flow rate at the inlet of the turbojet engine is

and substituting the known values gives

4. At the exit, the mass flow rate is

noting that the mass flow rate of fuel

has been. accounted for. With the effects of the pressure on the inlet and outlet, then thrust generated at this flight condition is

5. The fuel flow rate is

Consider the flow through a turbofan engine, i.e., an engine with a hot jet core of diameter

and a cold bypass fan of diameter

and the jet velocities from the hot core

, respectively. Write your result in terms of the bypass ratio and comment on your result. State any assumptions that you use. Hints: 1. Consider also the mass of fuel introduced into the engine. 2. Neglect all pressure difference effects. 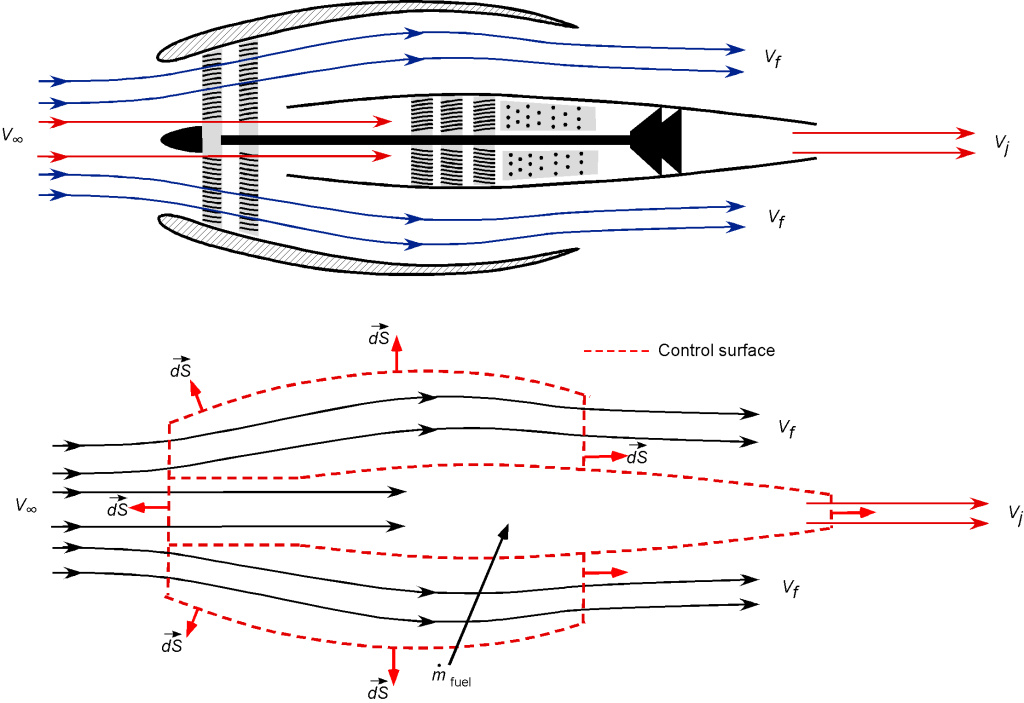 Assume one-dimensional flow throughout the problem. The mass flow through the fan (outer, cold section) is

The mass flow through the engine core (inner, hot section) is

and the mass of fuel added to the engine has been taken into consideration.

and for the engine core part that

where the pressure effects have been neglected, as per the question.

Therefore, the total thrust is the sum of the parts from the fan and the core, i.e.,

An aircraft flying at a true airspeed of 200 m/s is powered by a turbofan engine with a bypass ratio of 5:1. The mass flow rate into the engine core is 20 kg/s and the fuel consumption is 2 kg/s. The average velocity of the discharge flow velocity from the engine core is 410 m/s and from the bypass fan it is 270 m/s, both with respect to the engine. Determine the thrust and equivalent power developed by this turbofan engine. Neglect all pressure difference effects.

The mass flow of air into core of the engine is

and with a bypass ratio of 5:1 then the mass flow into the fan will be

The mass flow rate of fuel is

Therefore, the thrust from the engine core is

and from the fan the thrust is

The total thrust is then

In this case we are given that

The total thrust is then

that is developed is

Refer to the attached propeller charts, which are a standard form of performance presentation for all propellers. Assume that an actual propeller has a diameter of 7 ft and it is a constant speed propeller with a rotational speed of 2,000 rpm. The propeller operates at the equivalent of 8,000 ft ISA density altitude. 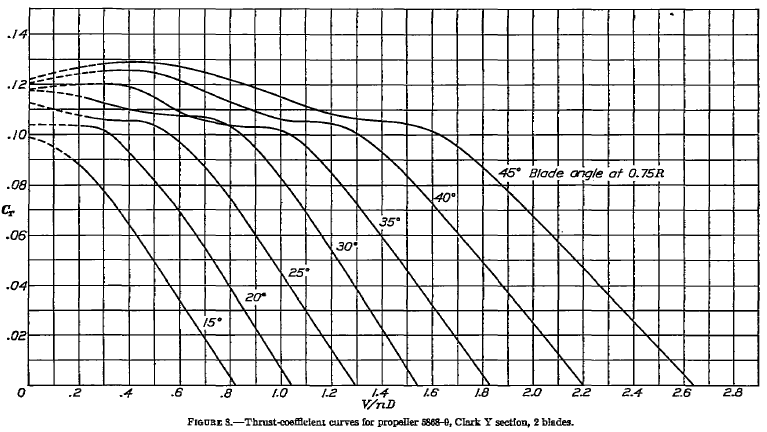 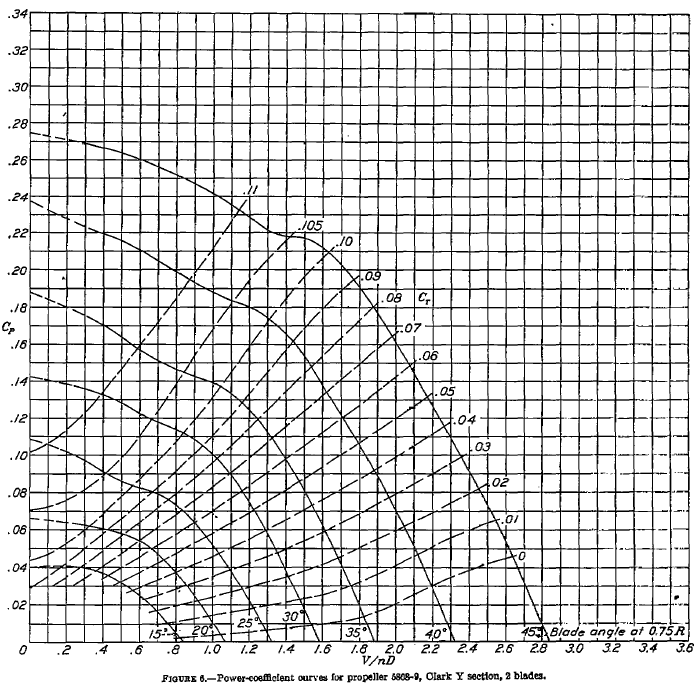 (a) At the peak efficiency the values of the the advance ratio can be read off the first chart. We can easily do this to two decimal places; for better accuracy the chart can be digitized. We are also given information about the specific propeller, which is fairly small would likely be for a general aviation aircraft, so in each case we can calculate the corresponding airspeed for a given value of

It is best to use a table to show the results, i.e.,

We are told that the propeller operates at the equivalent of 8,000 ft ISA density altitude, so according to the ISA equations then the density at this altitude is 0.001869 slugs ft

Again, it is best to use a table to show the results, i.e.,

so the corresponding power needed to drive the propeller is

be the helical tip velocity based on the vector sum of the rotational and airspeed components. The rotational tip speed of a propeller of diameter

and so the helical tip speed of the propeller is

is the forward airspeed. The helical Mach number

is the local speed of sound at the conditions at which the propeller operates. At 8,000 ft ISA density altitude,

As a final table to show the results, then the helical tip speed and Mach number are:

We notice that for an airspeed above 400 ft/s then the propeller blade tips would likely to begin to operate near or just beyond the critical Mach number (i.e., the onset of transonic flow), which for the thin tips of propeller blades is about 0.8. Under these conditions the propeller is likely to see some loss of propulsive efficiency.
A rocket motor is to be tested on a test stand. The burning the propellent occurs a steady rate of 150 kg/s, and the specific impulse of the propulsion system is 240 seconds. What thrust does the rocket engine develop?

is given in terms of the specific impulse, i.e.,