The non-dimensional similarity parameters Mach number and Reynolds number have already been introduced. They will usually appear from the process of dimensional analysis applied to almost all fluid flow problems. These are two of the most important parameters to understand aerodynamic flows, so they require special consideration and discussion. For example, of all the various ways of categorizing different aerodynamic flows, the distinction based on the Mach number is one of the most useful; it is often used to help quantify the degree of compressibility effects in a flow. The Reynolds number is another useful aerodynamic parameter that can help quantify the relative effects of viscosity to inertia effects in a flow. Hence, the classifications of flows based on the Reynolds number are also helpful. The terms Mach number and Reynolds number are so frequently encountered and used in aerodynamics that understanding what they mean and how they are used is essential for engineers.

is the magnitude of the flow velocity (i.e., the flow speed) and

is the speed of sound. Usually, the magnitude sign is dropped by recognizing that both quantities are in units of speed, and so

In general, the value of the flow velocity

is the ratio of specific heats and

is the gas constant (in appropriate engineering units).

is the local Mach number at a point P in the flow, then by definition, the flow is locally:

would be evaluated using the free-stream temperature

An airplane is in cruise flight at a true airspeed of 500 knots at 30,000 ft. Calculate the flight Mach number for these conditions. Assume ISA standard conditions.

. Therefore, the flight Mach number is

), then the flow may locally exceed the speed of sound as it moves over a wing or other parts of a flight vehicle, i.e.,

. This situation gives a mixed subsonic/supersonic flow field called transonic flow, as shown in the figure below. Most jet transport aircraft fly in transonic conditions where the free-stream Mach number is subsonic, but the local Mach numbers at some points on the wings are supersonic. Today, these aircraft use supercritical wing sections, allowing them to fly efficiently at airspeeds near the speed of sound.

For fully supersonic flows in that

everywhere, shock waves occur. A shock wave involves an abrupt flow change in pressure, density, and temperature. There is an irreversible process caused by viscosity and thermal conduction effects inside the shock wave. Therefore, the formation of shock waves leads to losses of pressure, momentum, and energy and manifests as a source of drag on a flight vehicle called wave drag.

At hypersonic speeds, which is usually defined for

, then not only do strong shock waves form, but kinetic heating and chemical dissociation of the air can also occur. However, hypersonic flows still need to be better understood and are the subject of much ongoing research.

Mach Number as a Measure of Compressibility

It should be clear why the Mach number can be used as a measure of compressibility effects in a flow. First, however, it is essential to note that the free-stream Mach number

by itself is not a reliable indicator of whether the local flow can be considered incompressible or not. This is because as the flow approaches and passes around a body, such as an airfoil, it will be locally accelerated, and its local velocity (particularly near its leading edge or nose) will increase. For example, suppose the free-stream Mach number is 0.3. As the flow accelerates over the upper surface of an airfoil, then the local Mach number may be as high as 0.5 or 0.6, or even higher, depending on the airfoil’s angle of attack.

However, the flow may be treated as essentially incompressible for flows around wings and bodies where the local value of

is less than about 0.3. To verify this, consider a fluid element initially at rest, which has density

. If this flow is accelerated to some velocity

and some Mach number

, the density of the fluid can be assumed to change according to the isentropic relationship

for air, the result in Eq. ??} being plotted in the figure below.

Notice that the variation of

from unity is small at low Mach numbers. Therefore, for local Mach numbers below a threshold of about 0.3, i.e., the density varies less than 5% for

Another important consequence of the compressibility of a gas is that disturbances produced at one point propagate to another point at a finite speed, i.e., at the speed of sound

. As an object (in this case, called a point pressure or acoustic source) accelerates from rest, it will emit disturbances in the form of pressure waves, as shown in the figure below. The speed of sound is the same in all directions in a uniform constant temperature fluid, so these waves manifest in three-dimensional space as a series of offset concentric spheres.x

As the point source moves faster, the pressure waves bunch closer together in the direction of motion and spread apart in the other direction, i.e., a Doppler effect. Eventually, as the source’s speed approaches the speed of sound, the source catches up with the previously produced pressure waves, which coalesce and become perpendicular to the direction of travel, which is the essence of how a shock wave forms. For supersonic motion, the shock waves bend back to form a Mach wave line. Although named after Ernst Mach, these oblique waves were first theorized by Christian Doppler. The angle of the Mach wave,

, can easily be calculated because it will be apparent from the velocity components that

is the velocity of the source,

is the speed of sound, and

is the Mach number of the source. Therefore, the Mach angle is simply

The photo below shows a fascinating schlieren image of the plethora of Mach (shock) waves an aircraft generates during supersonic flight, with the Mach cones identifiable. Notice the powerful shock waves (Mach cone) produced at the nose and tail of the aircraft, which are those responsible for the sonic booms heard on the ground. The flight Mach number is easily determined from the Mach angle, which in this case is about 70 degrees because

then in this case

so the aircraft is just flying supersonically. Notice also the turbulence and sound waves in the wake of the aircraft from the engine and its hot exhaust, that latter which appears as a shimmering effect because of the turbulence.

and is defined as

are the fluid’s density and viscosity, respectively,

is a reference velocity, and

More often than not, the reference velocity is the free-stream velocity

, and the density is the free-stream density

. For a wing, the reference length is the wing chord

), so the Reynolds number based on the chord is

This latter form of the Reynolds number that students first encounter in their study of aerodynamics, but it is not the only form encountered in practice. This form is often used in the scaling of flow situations, such as between an aircraft model in a wind tunnel and the full-size version, to obtain what is called dynamic flow similarity.

The wing of an airplane has a mean aerodynamic chord

of 2.75 m and it is in cruise flight at a free-stream Mach number of 0.82 at 30,000 ft. Calculate the Reynolds number for these conditions. Assume ISA standard conditions.

The Reynolds number will be

so a Reynolds number of about 27 million. Again, notice that the atmospheric properties have been evaluated using the International Standard Atmosphere (ISA) model, for which a handy online ISA calculator can be found here.

The figure below summarizes the range of Mach number and Reynolds numbers (based on the chord) for various flight vehicles and other things. Tiny flying things, such as birds and insects, encounter such low-flight Reynolds numbers that most of their energy goes into overcoming the effects of viscosity. Notice that the Reynolds numbers for jet airplanes range from 10

, i.e., from 10 to 100 million. Model aircraft (and many UAVs) will have Reynolds numbers much smaller in the range 10

It will also be apparent that Reynolds number and Mach number are interrelated by the velocity,

. For example, the Reynolds number based on chord can be written in terms of the free-stream Mach number as

Using the values for

for air at standard sea-level conditions then

or in SI units

This apparent interdependence of

On the numerator, the grouping

has units of force so it represents an inertial force. The coefficient of viscosity,

, is the shear force per unit area per unit velocity gradient, so the grouping on the denominator represents a viscous force. Notice that the ratio

has dimensions of a velocity gradient.

This outcome is very important in aerodynamics, summarized by the results in the figure below, which shows the lift-to-drag ratio for several airfoil sections as a function of the chord Reynolds number. Lift to drag ratio measures aerodynamic efficiency, so these results expose at least one significant effect of varying the Reynolds number.

The operation of the airfoil (or wing) at higher chord Reynolds numbers, e.g., higher flow speeds, will improve aerodynamic efficiency because the inertial effects dominate over the viscous effects. Notice that Reynolds number can also be increased by increasing the scale (size) of the wing. However, at lower Reynolds numbers, the relative effects of viscosity are higher, which manifests as higher profile drag and a lower lift-to-drag ratio.

from the point where the flow initially develops, i.e.,

For example, in the case of an airfoil, then

Experiments have shown that at Reynolds numbers based on

, the boundary layer becomes turbulent, which increases skin friction drag. The reason for this behavior is that natural flow disturbances develop (even over perfectly smooth surfaces) and causes a transition from a laminar to a turbulent boundary layer. 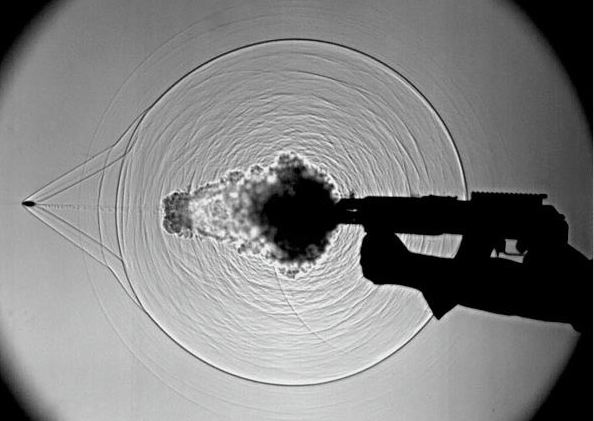 To improve your understanding of the use of similarity parameters in engineering, navigate to some of these online resources: