The second physical principle used in deriving the governing equations that describe aerodynamic flows (or the flow of a fluid, in general) is the conservation of momentum, i.e., the application of Newton’s second law. This principle is one of the most important for solving aerodynamic motion because it allows problems involving the forces produced by flows to be solved, such as the lift and drag on a wing or the thrust produced by a jet or rocket engine.

From elementary physics, Newton’s second law is usually written as

is the force on the system,

is the mass of the system, and

is the resulting acceleration of the system. However, the most general form of Newton’s second law is when it is written in terms of the time rate of change of momentum, i.e.,

is the total linear momentum in this case; naturally, there are analogous equations for angular momentum.

Here is a short video lesson on Newton’s laws of motion from Dr. Leishman’s “Math & Physics Hints and Tips” series.

Setting Up the Momentum Equation

The objective now is to apply the conservation of momentum principle to a flow to find a mathematical expression for the forces produced in terms of the familiar macroscopic flow field variables, such as density

Consider the control volume approach used previously, which is assumed to be fixed in space with the fluid moving through it, i.e., an Eulerian modeling approach. In general, the forces on the air as it flows through the control volume will manifest from two sources, namely:

The pressure force acting on the elemental area

, where the negative sign indicates that the force is inward and so in the opposite direction to the unit normal vector area, which always points outward by convention. Therefore, the total pressure force on the fluid in the control volume is the summation of the elemental forces over the entire control surface, i.e., the pressure force is given by

Now consider the body forces, where

. The body force on the elemental fluid volume

and the total body force is the summation over the volume

An example of a body force is gravity, so in this case, the body force per unit mass is simply the acceleration under gravity, i.e.,

, so that in terms of the body force vector, then

. By convention, the direction of

is usually vertically upward, so the minus sign here indicates that gravity is directed downward.

If the flow is viscous, and all fluids are viscous to a lesser or greater degree, then the viscous shear stresses

that arise over the control surface will exert a surface force. These forces will depend not only on the fluid’s viscosity but also on the velocity gradients in the flow, making evaluating such forces potentially difficult. Therefore, at least for now, the viscous effects can be recognized but not evaluated per se. The total viscous force on the flow as it passes through the control volume will be given by

It must be understood that the actual quantitative evaluation of this integral may be complicated and require some work, especially if turbulence is present.

Therefore, the total forces acting on the flow in the control volume will be

which will constitute the net force that must appear on the left-hand side of the final momentum equation.

Now consider the right-hand side of the equation, i.e., the term that must describe the fluid’s time rate of change of momentum. There will be two contributions to this, namely:

Consider the first term. At any point inside the control volume or on the control surface, the flow velocity is

. The mass flow across the element

so the flow of momentum across

The net flow of momentum out of the control volume over

is the sum of all the elemental contributions, i.e.,

Now consider the second term. The momentum of the fluid inside the element of volume

Combining all the above equations into the form

gives an expression for momentum conservation in terms of the total forces and time rate of change of momentum of the flow as it sweeps through the control volume, i.e.,

Equation 10 is the momentum equation in its integral form. It will be apparent that it is a vector equation, so three scalar equations are rolled into one, i.e., one equation for each coordinate direction. This general equation applies to any type of flow, compressible or incompressible, viscous or inviscid, etc.

Simplifications to the Momentum Equation

As in the use of the continuity equation for practical problem solving, the apparent complexity of the general form of the momentum equation can be simplified by making justifiable assumptions, the advantage being that the solutions of the resulting sets of governing equations (mass, momentum, and energy) most likely become commensurately easier.

Remember that any assumptions must be justified, which may require information from an experiment or a judgment call, i.e., based on experience. Experience is acquired from repeated problem solving, i.e., starting from the exemplar problems in the classroom.

Consider, for example, a steady flow. In this case

so the reduced form of the momentum equation will be

Furthermore, if the flow is additionally assumed to be inviscid then

. Therefore, in this case

Proceeding even further, if the flow is assumed to be steady, inviscid and incompressible then

and without body forces then

Reduce the general form of the momentum equation to a form suitable for application to the steady, compressible, inviscid, one-dimensional flow of air through a converging duct of circular cross-section, as shown below. 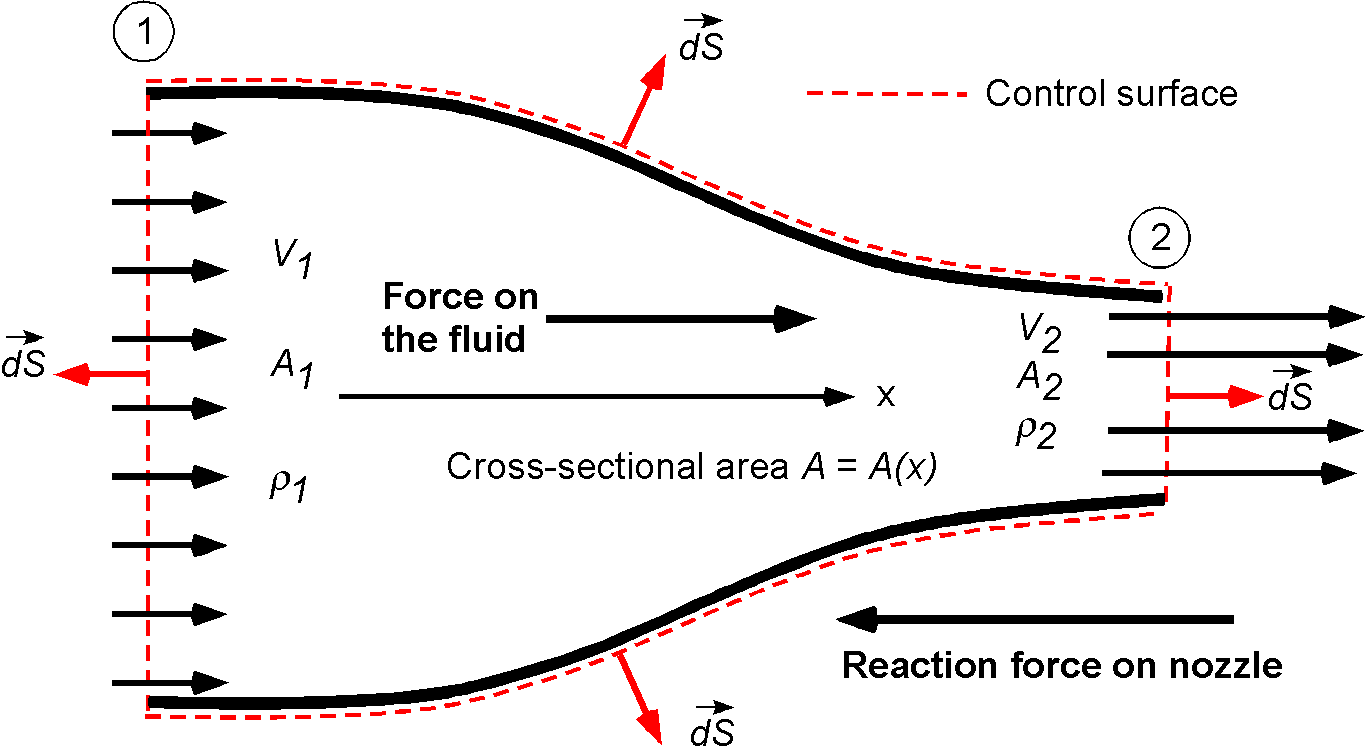 Proceed first by sketching the duct problem and b showing the control surface and annotating the inlet and outlet conditions appropriately, not only with what is known but also what is unknown. In this case, the possibility of pressure forces leads to a net pressure force on the duct.

The flow is steady, so

, and the flow is inviscid, so

. The fluid is air (which has a relatively low density), and there is no change in elevation from one side of the duct to the other, so it is possible to neglect all body forces, including the effects of gravity.

As previously derived, the general form of the momentum equation is

and the reduced form for the assumptions made that the flow is steady, compressible and inviscid, leads to

The flow can also be assumed to be one-dimensional, so the flow properties can change only in one dimension and this makes the problem easier.

There has to be a force on the fluid say

(to change its momentum) and so an equal and opposite force on the duct, say

, which is the unknown. Therefore, the left hand side of the equation can be written as

Also, continuity of the flow means that

and finally the reaction force is

Assume that the inlet is identified as station 1 and outlet as station 2. Assume also that the exit area is the same as the inlet area. The density of the air at the inlet can be found using

The residual force on the fluid for the conditions stated must be 83,736 N in the direction of fluid flow and the reaction force on the test stand will be in the opposite direction. Because there is a factor of safety requirement of 3, then the force to which the stand should be designed is about 251 kN.

A water jet with velocity

that exits from a nozzle strikes a vertical plate. The exit area of the nozzle is

. Find an expression for the horizontal force on the plate. If the volume flow rate through the nozzle is 0.5 m

and the diameter of the jet is 5 cm, then find the force on the plate in Newtons. The density of water can be assumed to be 1,000 kg m 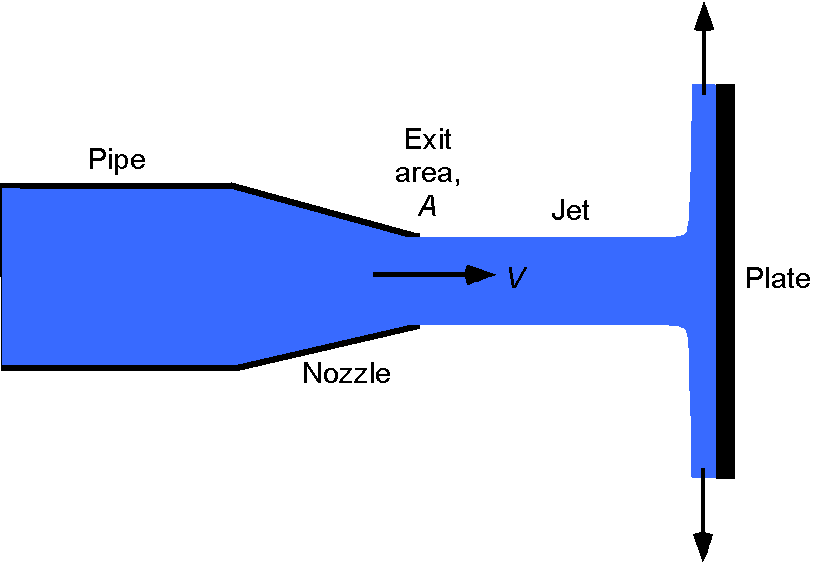 The use of the continuity equation gives

and because we are dealing with water then it is incompressible, so

Therefore, the force on the plate is

Applying the principle of the conservation of momentum to a fluid is needed whenever forces are involved, i.e., the application of Newton’s second law of motion.  The conservation of momentum is a fundamental principle that applies to fluid flows, and it is expressed mathematically through the momentum equation. The equation takes into account various forces that act on a fluid, such as body forces, pressure forces, and viscous forces. Depending on the specific problem, the momentum equation can be simplified by making appropriate assumptions, such as steady flow or inviscid flow, but only if these assumptions are justified. To solve for unknown quantities in fluid flow problems, the momentum equation can be combined with the continuity equation. In cases where pressure is involved, the principles of the conservation of energy must also be taken into account.

To learn more about the conservation of momentum applied to flow problems, check out some of these additional online resources: